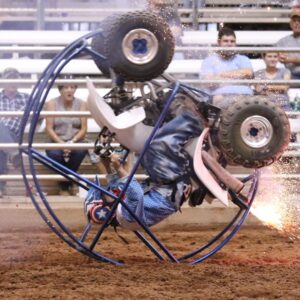 He works PRCA & PBR events all over the United States entertaining audiences everywhere, putting smiles on their faces. In 2016 he was selected for the Turquoise Circuit PRCA Finals as the barrel man. He was also chosen to The Challenge of Champions Finals as the Barrel Man from 2013-2016 and worked the GCPRA finals 6x. In 2018 Nate was selected GCPRA Clown/Barrel Man of the year. Nate feels truly blessed in being able to share his dream and excitement of rodeo with thousands of people, as he travels up and down the highway.

Nate was diagnosed with type 1 diabetes when he was 18 months old. He has lived his whole life being told you can’t do this and can’t do that because of your illness. He never looked at himself as if he had an illness. Taking shots, pricking his fingers was just the way of life. He never knew anything different. He looked at every doctor that told him “you can’t or you won’t be able to” as if it was a challenge. So in his travels from rodeo to rodeo he has met so many others with diabetes. Mainly younger adults or kids. He truly believes God puts you in situations and guides you in a purpose. If he can help one of these young diabetics with adapting and coping with their diabetes by helping them see they can live a normal active productive life he feels it was a success. Diabetes won’t stop you if you don’t let it. As he always says…Let The Good Times Roll!!!